We’ve been on blog-hiatus, spending valuable time with our fams, traveling to Ohio, and enjoying the holidays and the season of our 3rd anniversary. For those of you who don’t know, Laura and I were married on December 29th, 2006, right smack in the middle of the 2006 blizzardry that enveloped Colorado. People were stuck in the airport for days, shut in the house, cars were abandoned in snow drifts all over the sides of the roads, and (somehow!) Laura and I got married in the middle of it all. And it was magic. We were even featured in the paper (apparently it was entertaining to read about couples who somehow pulled off a wedding in the midst of such conditions!).

Many of our [amazing] couples have asked us about when things go wrong at weddings, and what we’ve done to mitigate problems or otherwise make things go as smoothly as possible. Well, we definitely have experience in that field! For us, on our wedding day nothing worked quite like we had planned, but we made everything work, and we were still married, and it was still magic. So, to all you future married-folk, don’t sweat the small stuff. While the importance of the day you’re married is undeniable, and is most certainly worthy of all the plans, expense, and effort, what happens after the wedding day counts more than on wedding day.

On a personal note, it’s cold outside, and snowy. Before Laura and I were married I’d never really had much preference for winter, but now every time this season begins to roll around, there’s something in me that is enlivened, awakened, and I look forward to the snow falling. It reminds me of when Laura and I chose to bind our two hearts together in love, and I’m thankful that somewhere deep in the cobwebs of my mind, there is now an intrinsic tie between snow falling and the season when Laura and I were married. I love it. I love my wife. There is nothing better than being married 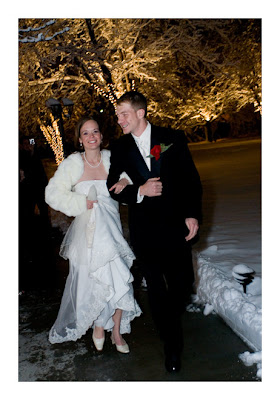